Travelers: Don’t Let The Cat Losses Get You Down, Company Is Solid (NYSE:TRV)


On Thursday, July 23, 2020, property & casualty insurance giant The Travelers Companies, Inc. (TRV) announced its second quarter 2020 earnings results. At first glance, these results were very disappointing as the company failed to meet the expectations of its analysts in terms of earned premium and posted a net loss. The company did manage to beat analysts’ earnings expectations though. This was somewhat expected as Travelers did previously state that higher than normal catastrophe losses would be a drag on its earnings results. With that said though, these results were certainly not all bad and we do see some of the stability that we have come to expect from insurance companies. Travelers is overall one of the more conservative companies in the insurance industry and this has positioned it reasonably well to ride out the current problems in the economy.

As noted in the highlights, Travelers’ results were marred by a relatively high level of catastrophe losses. This is something that we expected and not only because of the company notifying us of this fact in advance. One of the biggest events that occurred during the second quarter was the outbreak of widespread riots throughout many of America’s major cities. These riots caused a significant amount of property damage, which as an insurance company Travelers would be expected to cover for its customers. In addition to this, there were a number of severe storms throughout the eastern and Midwestern states that caused the company’s customers to suffer property damage. Perhaps surprisingly, the outbreak of the COVID-19 pandemic had only a very limited impact on the company’s performance. As we can see, the company’s net written premiums were almost flat year-over-year and the company’s total revenues were only down about 6% over the period so we can see that the majority of its customers continued to keep their insurance policies in place and continued to pay their premiums. This is exactly the kind of thing that we like to see in an insurance company because it showcases the company’s conservative underwriting culture, which should position the company to ride out any weakness in the broader economy.

One of the most important metrics to use to judge the performance of an insurance company is the combined ratio. This ratio tells us the percentage of a company’s collected premiums that was used to pay out its customers’ claims. Obviously, we ideally want this ratio to be less than 100% because that indicates that the company collected more in premiums than it had to pay out. Thus, that scenario would mean that the company was able to add to its reserves. Unfortunately, Travelers failed to achieve this during the quarter. This is a result of the high catastrophe losses. If we exclude these losses, the company would have had a combined ratio of 91.4% so the company is obviously underwriting and pricing its policies appropriately. It was simply the result of unusual and unforeseen events that swung Travelers to a loss.

It was not all of Travelers’ lines of business that saw losses during the period. The company’s surety bond unit, for example, had a combined ratio of 93.8% in the period. This is significantly higher than the 74.9% that the company had in the prior year quarter, but it does at least still represent a profit. One of the reasons for this increase was actually the COVID-19 outbreak and resulting economic shutdown. This resulted in things such as various construction projects getting delayed or cancelled, which forced Travelers to pay out on some of its outstanding surety bonds. The company also reports that losses on its management liability policies were higher than normal, which Travelers attributes to the impact of COVID-19. This is partly due to the massive layoffs and other such things that have accompanied the economic shutdown. Unfortunately, this is something that could prove to be an ongoing problem since the economy has still not returned to a state of normalcy and I doubt that it will until people are no longer terrified of contracting the novel coronavirus.

Travelers is frequently considered to be a business insurer for good reason. The company’s business insurance unit is by far its largest. This unit reported net written premiums of $3.777 billion, or 51.42% of the company’s total, in the most recent quarter. This was a slight decline over the $3.874 billion that it had in the previous year but overall the two figures are relatively comparable. This unit suffered in a major way during the quarter from catastrophe losses as illustrated by its 107.1% combined ratio. As this is by far Travelers’ largest business unit, we can see how these losses would have a negative impact on the company as a whole. The company’s performance in some of its policies was respectable though. For example, it had lower workers’ compensation losses than usual, which might be an effect from people being at home instead of in their offices and places of business.

Travelers also saw its personal insurance unit deliver a loss in the period for largely the same reasons that the business insurance unit did. The combined ratio here was 101.3% so it was not quite as bad though. As we might expect, this unit actually benefited somewhat from the COVID-19 outbreak. The stay-at-home orders that most state governments issued resulted in people doing less driving than normal so of course they would have fewer accidents that Travelers would have to pay out on. While the improvement here was not enough to completely offset the catastrophes, it was still something that was nice to see from the company’s perspective.

As is the case with most insurance companies, Travelers invests its reserves in relatively conservative growth assets, primarily bonds. The company’s investment portfolio is currently valued at $80.6 billion, with about 94% of its in bonds. The bond portion of the portfolio is roughly evenly split between municipals and investment-grade corporates:

As anyone that follows the financial media could tell you, not all municipal bonds are created equal although they are all generally considered to be reasonably safe assets. For example, there is a lot of fear surrounding bonds issued by the state of Illinois due to the well-known problems that state is having with its underfunded pension and declining population. Travelers’ municipal bond portfolio is invested in the bonds issued by fairly highly-rated states however, which should provide us with some modicum of comfort: 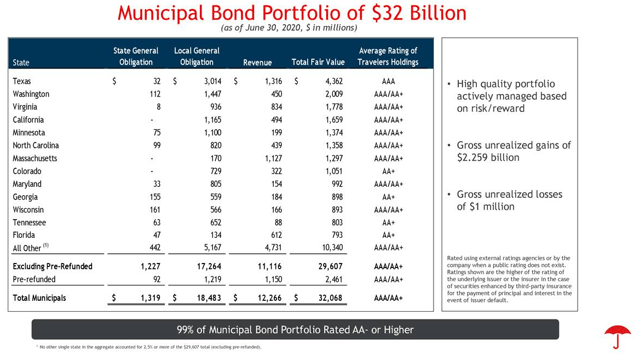 One of the defining characteristics of bonds is that their prices move inversely to interest rates. This is one reason why bonds have been a very well-performing asset this year as the Federal Reserve has been slashing interest rates to deal with the economic shutdown in reaction to the COVID-19 pandemic. This had a beneficial impact on Travelers, which saw the value of its bond portfolio surge over the first six months of the year. We can see this quite clearly by looking at the company’s book value, which is mostly the value of its investment portfolio. As noted in the highlights, Travelers had a book value of $106.42 per share at the close of the second quarter compared to $101.55 per share at the start of the year. This is a 4.80% increase in just six months. It is important to note though that these are unrealized gains so should something cause bond prices to decline then it is quite possible that we will see the company’s book value decline.

While the decline in interest rates was good for asset values, it was not as good at providing Travelers with an income. As we can see here, the company’s investment income declined fairly considerably from prior quarters: 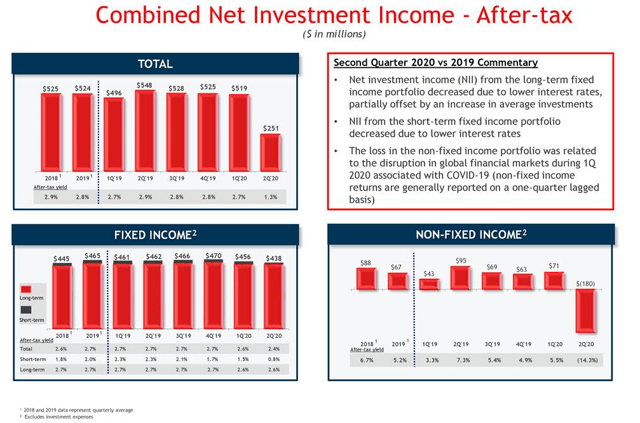 It is important to note though that it was losses on that portion of the company’s portfolio that is not invested in bonds that accounted for this. The bonds provided a rather stable income, which makes some sense because the regular payments on bonds do not typically change when interest rates do. The real risk is that bonds mature and the company will not be able to reinvest the money at the same yield. There are only going to be a limited number of bonds maturing at any one time so this is not usually too big of a concern. We can also see that Travelers has not been affected too much by defaults or anything like that, which is a testament to the high quality of the company’s bond portfolio.

In conclusion, Travelers has not been thus far impacted much by the COVID-19 pandemic. Indeed, we could make the argument that the company was helped much more than it was hurt. We do see some impact from the riots that followed though as the losses from this and the severe storms were sufficient to swing the company to a loss. This should hopefully not a frequent recurrence and the company may increase its prices at a later time in order to compensate for this. Overall, the company remains a bastion of stability, which is exactly what we want out of an insurance company.