Capitalist market economies have the best track record for growth and prosperity. While the system is not perfect, no other market system performed better throughout history. Moreover, some of the shortcomings of capitalist systems can be mitigated by external intervention. A reliable set of rules and laws is, for example, indispensable.

However, there is also a big gray area of government interference that leads to unintended consequences despite benevolent policy intentions. Corporate America has most likely not reproduced its innovation and efficient capital allocation in specific sectors during the last decade. Taxpayers’ money has been allocated to save banks, auto builders, and the airline industry, for example. Moreover, the Fed stepped in as a major buyer of corporate debt during the same period. This creates the wrong incentives as the economy relies increasingly on external intervention. The best example is the track record of the bailed-out companies over the past decade. Can you name three innovations that the saved banks, automakers, and airlines came up with during that period? There were no significant innovations, and it is reasonable to question if the money could have been allocated better. Innovation, a dominant force behind growth and prosperity, from new market entrants was probably impeded.

Don’t Bank On The Fed Put

A major narrative in 2020 is “Don’t fight the Fed”. Market participants are quoting Fed policy in relation to miscellaneous theories that have one bottom line – the Fed will prevent the market from falling. However, the most recent evidence does not support the “Fed put”. The broad-based U.S. indices dropped on three occasions between 35% and 60% during the past 20 years. There was no Fed put that prevented a significant drawdown. Moreover, recovery has not been swift for those who entered the market near the cycle high. Investors who bought U.S. stocks around the 2000 tech bubble, for example, were in negative territory with their investment for more than a decade. Therefore, it is not good to rely on the Fed to prevent a durable market correction.

Those who follow us know that we held a bearish stance on equities lately. That stance has not changed. There was no money to be made on stocks as the S&P 500 flatlined over the past month. Moreover, some sectors recorded steep losses. The first chart shows the divergence between banks and the tech sector. Tech swung from one high to another while banks sold off by almost 25% over the past month. The second chart below shows the percentage of S&P 500 components above their 200DMA. It reveals a very weak reading below 40% despite a 45% rally since March. The 2003 and 2009 recoveries were broad-based and resulted in well above 80% readings after 40% of price gains. The market’s engine is not working properly as the rally is concentrated in a few stocks. Divergence is a typical characteristic during topping processes. It hints to a reversal sooner or later unless the other sectors follow up on technology. However, that is unlikely as the recession is at an early stage based on the historical recession durations. Recessions have been a major headwind for equities historically. 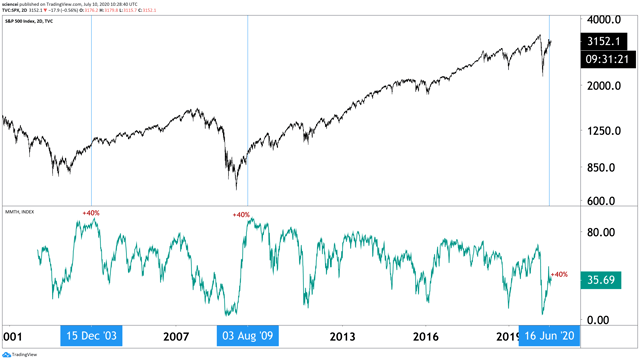 There are two takeaways for investors in the current environment. The first one is that investment-grade bonds are safe short term. The major central banks across the globe follow a similar policy, and there is no end in sight for their bond purchasing programs. The second takeaway is that it makes sense to diversify globally. The U.S. economy has been the clear winner over the past decades. However, other major economies caught up in terms of competitiveness, and some have a better fiscal position. Last but not least, U.S. stocks are among the most expensive in the world. Therefore, the best strategy remains to preserve capital and diversify globally. 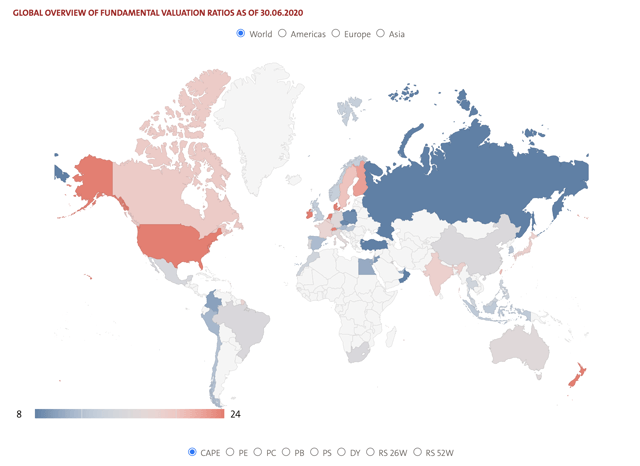 Disclosure: I am/we are short GLOBAL EQUITY INDICES. I wrote this article myself, and it expresses my own opinions. I am not receiving compensation for it. I have no business relationship with any company whose stock is mentioned in this article.