© Reuters. A currency dealer works in front of electronic boards showing the Korea Composite Stock Price Index (KOSPI) and the exchange rate between the U.S. dollar and South Korean won, in Seoul

SINGAPORE (Reuters) – A two-day equities rally lost momentum on Thursday, and investors sold riskier currencies, as stimulus negotiations dragged on in Washington and investors fretted over a likely spike in U.S. jobless claims.

MSCI’s broadest index of Asia-Pacific shares outside Japan wobbled either side of flat. slumped 4% and U.S. stock futures fell 1%.

The dollar climbed around 1% against the Australian and New Zealand dollars and the yen rose 0.4% against the dollar as investors sought shelter.

“We are not out of the woods just yet,” said Stephen Daghlian, at brokerage CommSec in Sydney. “There are plenty of risks in the next couple of weeks.”

First among them are initial jobless claims in the United States due at 1230 GMT, with forecasts in a Reuters poll ranging from 250,000 claims all the way up to 4 million.

U.S. Federal Reserve Chairman Jerome Powell is also due to appear on NBC television around 1100 GMT.

The Fed’s promise of unlimited bond buying has eased some of the virus-driven financial stress this week. But Powell is also likely to be asked about the real economy, and the apparent divide between health officials and President Donald Trump as to how quickly the country can return to work.

Meanwhile, as Senate leaders in United States hoped to vote on the stimulus package late in the Washington night, markets’ patience and optimism are beginning to waver.

“There has been so much stimulus thrown at this,” said Jun Bei Liu, portfolio manager at Tribeca Investment Partners in Sydney.

“But the positivity related to it is really just sentiment,” she said. “A lot of companies have withdrawn earnings guidance…these are still ahead of us. We don’t know how bad it could be.”

Hong Kong’s was down 0.5% by mid-morning while regional trade was mixed. Indexes in China posted meager gains and Australia, Indonesia and Thailand advanced.

The money at stake in the stimulus bill amounts to nearly half of the $4.7 trillion the U.S. government spends annually.

But it also comes against a backdrop of bad news as the coronavirus spreads and more signs of economic damage.

Singapore’s economy suffered its biggest contraction in a decade in the first quarter, data showed on Thursday, as the coronavirus pandemic prompted the city-state to cut its full-year GDP forecast and plan for a deep recession.

Spain’s coronavirus death toll has overtaken China’s and a total of 21,221 people have died globally.

California Governor Gavin Newsom told reporters on Wednesday that a million Californians had already applied for jobless benefits this month – a number that knocked stocks from session highs and has analysts bracing for even worse to come.

RBC Capital Markets economists had expected a national figure over 1 million in Thursday’s data, but say “it is now poised to be many multiples of that,” as reduced hours across the country drive deep layoffs.

Citi Private Bank said the peak could reach 15-18% of the total U.S. workforce, some 25 million people.

Oil steadied with stimulus hopes offsetting fears of plunging demand. futures slipped 35 cents to$24.14 per barrel and futures fell 0.9% to $27.15.

Global: In the past week, we switched from an unknown growing uncertainty around Covid-19 to a global panic with massive repercussions on markets. The US 10Y yield fell below 50bps and oil prices tumbled overnight by 30% to their lowest level since the financial crisis, the most since the Gulf War in 1991, as a result of Saudi Arabia launching an oil price war. To the exception of the US dollar, traditional safe havens such as gold and US Treasuries received massive support; in the FX market, the yen, the Swiss franc and the euro received strong bids in the past two weeks. We wrote a recent article entitled ‘Don’t lose faith on the yen,’ in which we highlighted the importance of the Japanese currency in periods of high uncertainty as long JPY investors would have generated average monthly returns of 45bps when the VIX was trading above 20. In order to ease any health or financial fears, the Fed decided to cut rates by 50bps on March 3rd in an emergency meeting and central banks around the world have acted co-ordinately in order to bring down price volatility. As recession fears are growing exponentially around the world, the market is now pricing in 3 cuts for the next FOMC meeting (March 18th). This would bring the number of cuts to 5 in a single month (i.e. 1.25 percent cut), the largest MoM change since January 2008 (figure 1, left frame). The last time we saw greater volatility in the MoM change in FFR was in the last 1970s /early 1980s following the Great Inflation period.

Euro: The situation keeps worsening and it is clear now that the euro area will enter into a deep recession in the coming quarter, especially if more and more regions are in entire lock-down. Investors have massively liquidated their equity positions in the past two weeks and the Eurostoxx50 is now down over 20%. Banks will particularly struggle in this current environment as bankruptcies are expected to rise, particularly for small and medium businesses; Euro banks index (SX7E) sits at its record low and is down nearly 35%. One interesting development was the dramatic appreciation of the euro during the recent sell-off as the single currency is up 6 figures against the US dollar. The term ‘Yenification of the euro’ has started to emerge as investors have been comparing it to the yen, which tends to appreciate during periods of market stress. We saw similar episodes in some previous sell-offs (i.e. August 2015 sell-off following the CNY ‘devaluation,’ which generated a significant spike on the euro); however, the euro fails to perform strongly on average in periods of market stress (see chart of the week).

As expected, net short specs interest on US Treasuries decreased sharply in the past month, down 402K to 727K. Growing uncertainty over Covid-19 has rattled investors’ confidence and we switched to a complete risk-off environment in the past week, with Treasuries receiving titanic bids. We now expect growth to falter in the coming quarters as the situation remains far from being resolved.

EUR/USD: The euro received strong support in the past two weeks; EURUSD is up 6 figures and has been flirting with its 1.1450 resistance, its 50% Fibo retracement of the 1.0340–1.2550 range. The pair looks slightly overbought and we would expect it to consolidate in the coming days if the panic on market eases. We went short at 1.1385 with a tight stop at 1.1465 and a first target at 1.1285. 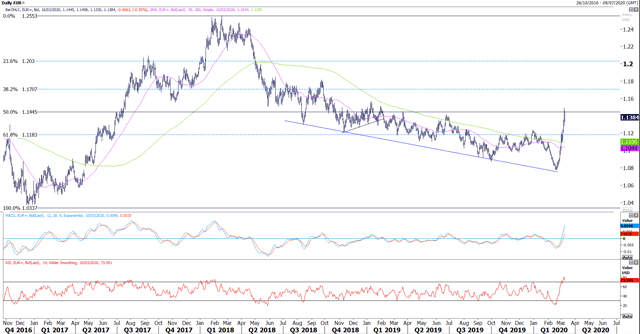 EUR/GBP: The euro also experienced a strong rally against the pound, with the pair up more than 4 figures to 0.8740 (its 200D SMA). Even though we may see a slight consolidation on the pair in the short term, we prefer to play the euro against the US dollar for the moment. 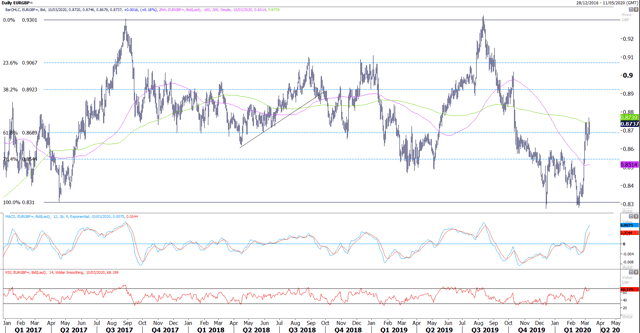 USD/JPY: The yen experienced a strong rally during the recent sell-off and USDJPY consolidated by more than 10 figures from peak to trough. The pair is now back above 104 and could continue to appreciate in case equities rise globally. Even though we consider the current level a good opportunity to buy the pair, it is risky to short the yen in this current environment. We would stay out of it for the moment.

USD/CHF: The franc also reacted positively to the sell-off and USDCHF fell sharply to test its long-term support at 0.9250. We also think there could be a little consolidation to the upside, hence we went long USDCHF at 0.93 with a tight stop at 0.9250.

Gold (GLD): We stand ready to buy the dips on gold at 153.50 in case a global panic selling reaches the market in the coming days. We still keep a tight stop at 151.50.

Chart Of The Week

In the past two weeks, the US dollar reacted negatively to the recent sell-off and depreciated significantly against two traditional safe havens, the Swiss franc and the Japanese yen, but also against the euro. Hence, some investors have concluded as the euro has become the ‘new funding’ currency, it will also act as a safe asset that appreciates in risk-off environments.

However, we know that inertia – whether the currency behaved as a safe asset in the past – is an important factor in determining what makes government bonds or currencies a safe asset. This chart shows that in the past 30 years, the euro has not performed very well in periods of market stress, averaging -2.7bps in monthly return when VIX was trading above 20. This is far below the 44.3bps and 12.1bps generated by the yen and the franc, respectively. We will see if the momentum on EURUSD persists if fundamentals start to deteriorate sharply in the euro area in the coming months. 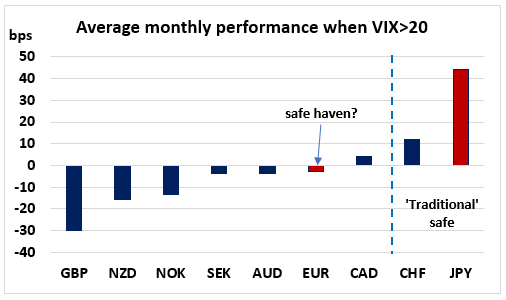 Disclosure: I am/we are long USDCHF, SHORT EURUSD. I wrote this article myself, and it expresses my own opinions. I am not receiving compensation for it (other than from Seeking Alpha). I have no business relationship with any company whose stock is mentioned in this article.