Stock benchmarks on Friday rose modestly higher as investors looked to close out a volatile, holiday-shortened week that has the tech-heavy Nasdaq Composite on track for its biggest weekly loss since the height of the pandemic-induced market selloff in March.

How are major benchmarks trading?

climbed 48 points, or 0.5%, at 10,952. But all three benchmarks were trading off their intraday peak near the open, highlighting the week’s choppy action.

A decline in the S&P 500 index for the week would mark the benchmark’s first back-to-back weekly drop since May.

“While monetary policy is set to remain supportive for several more quarters, valuations are high across assets and volatility is resurfacing,” said Elia Lattuga, co-head of strategy research at UniCredit Bank, in a note. “The breadth of the rally is still limited and the recovery uneven—hence developments in the economic outlook and political risks represent significant threats to risk appetite.”

Stocks were unable to follow through Thursday on a Wednesday bounce that saw equities recover somewhat from a three-day, tech-led rout that pushed the Nasdaq into correction territory, falling more than 10% from its record close set last week.

Weakness on Thursday was partly tied to the inability of U.S. politicians to agree on a new coronavirus rescue package after Democrats blocked a Republican bill on the Senate floor, leaving the way forward unclear, analysts said.

Meanwhile, investors have fretted that the sharp rally that took stocks from their March pandemic lows to new all-time highs had left valuations significantly stretched for the large-cap, tech-related stocks that had led the rally this year. Among those highfliers, shares of Apple Inc.
AAPL,

were on track for weekly declines of more than 6%, while Facebook Inc.
FB,

In U.S. economic news, the consumer-price index for August rose 0.4% last month, beating average economists’ estimates for a rise of 0.3% but falling below the past two months at 0.6%. On a year-over-year basis, the CPI increased 1.3% after gaining 1.0% in July, the Labor Department said on Friday

Looking ahead, Federal budget figures for August are due at 2 p.m. Eastern.

Which companies are in focus?

What are other markets doing?

The yield on the 10-year Treasury note
TMUBMUSD10Y,

The ICE U.S. Dollar Index
DXY,
,
which tracks the performance of the greenback against its major rivals, fell 0.1%.

and the Shanghai Composite Index
SHCOMP,


© Reuters. The German share price index DAX graph is pictured at the stock exchange in Frankfurt

Australia expects to receive its first batches of a potential COVID-19 vaccine in January after a deal was struck with CSL (AX:) to manufacture two vaccines, one developed by rival AstraZeneca (L:) and Oxford University, and another in CSL’s own labs with the University of Queensland.

Sanofi (PA:) rose 1% after it said a coronavirus vaccine it is developing with Britain’s GlaxoSmithKline (L:) was likely to be priced at less than 10 euros.

Autos () led sectoral gains in Europe after analysts at JP Morgan said the overall tone for production outlook in the European autos sector was “upbeat”, following its meetings with industry leaders.

The STOXX 600 has remained stuck in a tight range since June, as a euro zone economic recovery appeared to be losing steam.

A batch of middling economic data last week bolstered expectations the ECB would maintain an accommodative stance to support inflation, in line with the U.S. Federal Reserve.

“Liquidity and low interest rates alone cannot be the solution to everything, so it’s essential to see continued improvement in economic data and an end to the pandemic for sustainable upside in risk assets,” said Hussein Sayed, chief market strategist at FXTM.

“German industry eked out a meagre increase in production in July, leaving output still well below its pre-crisis level. Production is likely to have increased again in August, but we now seem to be past the period of rapid catch-up growth,” said Jack Allen-Reynolds, senior Europe economist at Capital Economics.

U.S. markets are closed on Monday for the Labor Day holiday.


While there were no IPOs this past week, five SPACs went public ahead of the post-Labor Day rush.

Boxer Capital’s warrantless SPAC BCTG Acquisition (NASDAQ:BCTG) upsized to raise $145 million. The company is led by Boxer Capital co-founders Aaron Davis and Christopher Fuglesang, and plans to leverage its management team’s experience and target a business in the biotechnology industry.

Editor’s Note: The summary bullets for this article were chosen by Seeking Alpha editors.


On Aug. 27, the Fed announced a new inflation targeting regime:

On price stability, the FOMC adjusted its strategy for achieving its longer-run inflation goal of 2 percent by noting that it “seeks to achieve inflation that averages 2 percent over time.” To this end, the revised statement states that “following periods when inflation has been running persistently below 2 percent, appropriate monetary policy will likely aim to achieve inflation moderately above 2 percent for some time.”

There are several reasons for the change. The first is that the market interpreted the previous “symmetrical” program as imposing an inflation ceiling. Vice President Clarida explains (emphasis added):

A second reason for this change of course is that low inflation — which increases the possibility of deflation — is now the global norm.

Above is a chart for the EU’s core inflation rate since 2002. It last hit 2% in 2007-2009. Even then it barely moved above that level and then only for a little more than a year. Since then prices have trended lower.

The situation in Japan is more pronounced. The blue line shows the absolute value of the CPI using the left scale. Prices have been near stagnant for over 20 years. The red line shows the Y/Y percentage change in CPI, which has only moved above 3% once in the last 25 years.

Above is a chart for the Y/Y percentage change in core CPI (in blue) and the core PCE price index (in red). Both have been very tame for about 20 years.

Low inflation is reflected in r* – the hypothetical interest rate that’s neither stimulative nor restrictive. The Richmond Fed calculates this amount as: 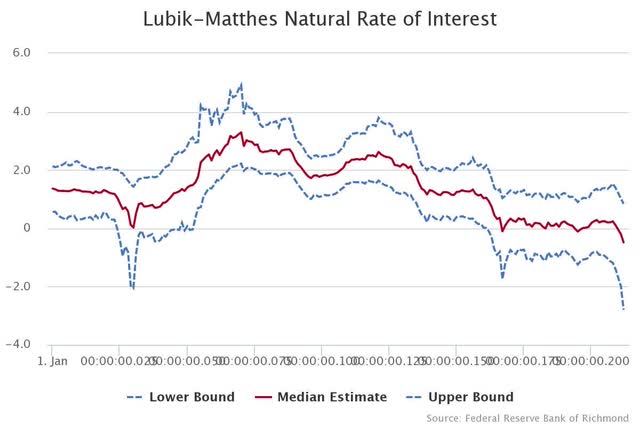 The data leads to this conclusion: In the developed world, deflation is far more a threat than inflation.

There are four reasons for weak pricing pressures. First, the EU, US, and Japan’s populations are trending older. As this occurs, people save more and consume less. The former increases the amount of available funds while the latter eases demand-pull pressures. Both lead to lower inflation. This was first explained by Ben Bernanke in his Global Savings Glut paper. Second, increased global competition has helped to contain costs. Third, increased price transparency – especially as a result of the web – has given purchasers more negotiating power. Fourth, the de-unionization of the US labor force has lowered wage pressures.

Now, let’s return to the Fed’s statement about inflation. They said they would tolerate a 2% average rate of inflation. Using simple numbers, let’s say the PCE price index is 1% for 10 months. It would have to run at 3% for the next 10 months before the Fed would raise rates. At this point, some people will argue that inflation could run out of control. But that ignores a basic fact: Deflation is now the primary threat to the US economy. Put another way, inflation just isn’t a problem right now.

For those of us who came of age during the 1970s and 1980s, the idea of tolerating higher inflation seems anathema. But Paul Volcker successfully broke inflation in the early 1980s, bring in the “great moderation.” Now the possibility of an extended period of deflation is far greater. The Fed is now doing everything it can to encourage and cultivate pricing pressure.


© Reuters. Head of Volkswagen works council Bernd Osterloh addresses the media after a supervisory board meeting at the Volkswagen plant in Wolfsburg

BERLIN (Reuters) – Volkswagen (DE:) sees no need for a four-day week at its plants to secure jobs despite a growing shift to electric cars that are easier to build and require fewer workers, the company’s head of labour relations was quoted saying on Sunday.

Germany’s largest trade union IG Metall on Aug. 15 proposed negotiating for a transition to a four-day week across industry to help secure jobs, against the backdrop of economic fallout from the coronavirus crisis and structural shifts in the auto sector.

But VW labour chief Bernd Osterloh told Welt am Sonntag newspaper that VW’s existing cost-cutting plan, that includes reducing the workforce by up to 7,000 through the early retirement of administrative staff at its Wolfsburg headquarters, was enough to help it overcome the coronavirus crisis and other issues.

“At the moment we are not talking about less work,” Osterloh said. “With the Golf we had the (production) levels of last year in June and July and introduced extra shifts,” he added, referring to one of the company’s most popular models.

“The four-day week is not an issue for us.”

Demands by IG Metall, which represents 2.3 million employees in the metal working and electrical sectors, are potentially significant in Germany because they often set benchmarks for wage negotiations in those industries and beyond.

VW in 2016 set out a cost-reduction programme dubbed Future Pact, but the company has ruled out compulsory layoffs until 2025. Osterloh was quoted as saying in July that VW had no need for deeper cost cuts to counter the effects of COVID-19, which dealt a severe blow to car sales.