WASHINGTON (Reuters) – The U.S. Transportation Department said late on Friday it had granted tentative approval to 15 airlines to temporarily halt service to 75 U.S. airports because of the coronavirus pandemic.

Airlines must maintain minimum service levels in order to receive government assistance but many have petitioned to stop service to airports with low passenger demand.

Both United Airlines (O:) and Delta Air Lines (N:) won tentative approval to halt flights to 11 airports, while JetBlue Airways Corp (O:), Alaska Airlines (N:) and Frontier Airlines were approved to stop flights to five airports each. The department said all airports would continue to be served by at least one air carrier.

The Transportation Department said objections to the order can be filed until May 28.

U.S. air carriers are collectively burning through more than $10 billion in cash a month as travel demand remains a fraction of prior levels, even though it has rebounded slightly in recent weeks. They have parked more than half of their planes and cut thousands of flights.

The department has previously granted airlines waivers to cancel some additional flights and denied others. On May 12, the department said it would allow carriers to halt flights to up to 5% of required destinations.

Only half of eligible carriers have applied to cut more flights.


Despite the currently depressed oil prices, Whitecap Resources’ (OTCPK:SPGYF) management announced during the first-quarter earnings it would maintain the company’s dividend.

Before discussing why that decision could have a negative impact on the Canadian oil producer, let’s have a look at how the company is navigating through these challenging times.

Photo by WORKSITE Ltd. on Unsplash

Note: All the numbers in the article are in Canadian dollars unless otherwise noted.

That statement doesn’t mention the better-than-expected performance was due to the C$16.2 million acquisition of the Canadian oil producer Hyak Energy on January 15, though.

In any case, given the lower year-over-year average commodity prices during Q1, funds flow dropped to C$131.7 million, down 18.2%, despite the 3.9% increase in production compared to last year.

The company’s net debt increased to C$1.27 billion, up from C$1.19 billion at the end of last year, partly because of the Hyak acquisition.

As a result of the increased net debt and lower funds flow, the net debt-to-annualized funds flow ratio jumped to an elevated ratio of 2.4, up from 1.6 three months before.

Before the coronavirus-induced oil price crisis, Whitecap Resources had forecasted WTI prices to increase every year over the long term, starting at US$61/bbl in 2020.

In contrast, you can see below the much more conservative forecasted WTI price assumptions that led to that write-down. The company’s price deck below indicates WTI prices are forecasted to stay below US$50/bbl until 2022 included.

The increase in the after-tax discount rate used to determine the value of the assets, from 10% at the end of 2019 to 13% at the end of Q1, contributed to C$908.3 million of impairment.

Given the depressed and volatile oil prices over the last few weeks, management announced in March a capital reduction program and a dividend cut to protect the company’s balance sheet.

These decisions are summarized in the slide below. 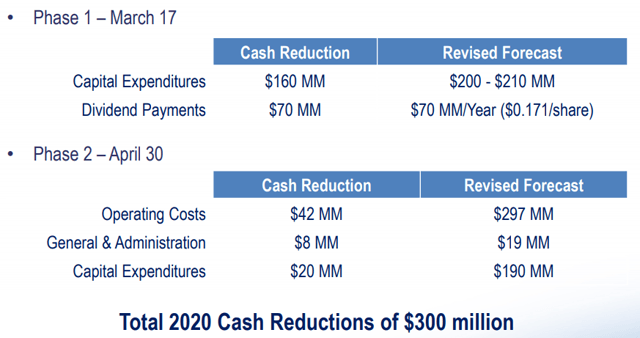 As a result, management plans to shut-in 2,000 boe/d in 2020. And with the company’s reduced capital program, annual production should drop to 66,000 boe/d, down from 71,500 boe/d previously, based on the midpoint of guidance.

Given the company’s capital program of C$138.8 million during Q1, management expects capital expenditures will amount to only C$51 million for the rest of the year to reach C$190 million, which explains the forecasted drop in production to 59,500 boe/d in Q4.

Whitecap Resources should profit from its strong hedging position this year. Its first-quarter funds flow benefited from C$19.8 million of realized gain. And unrealized gain amounted to C$149.4 million at the end of last quarter.

But strong hedges aren’t a sustainable advantage in the context of depressed commodity prices.

As an illustration, the table below shows a summary of the company’s hedges. Whitecap Resources hedged only 5% of its expected oil production in 2021, at lower average collar prices compared to 2020.

Also, the company added some WTI hedges after Q1 at swap prices that seemed unthinkable a few weeks ago: It hedged 12,000 bbls/d in May at C$23.57/bbl.

Dividends vs. balance sheet and acquisitions

Management is taking the right operational decisions to face this challenging oil environment. But the decision to maintain the dividend could have a negative impact on Whitecap Resources.

After its cut by 50% in March, the annual dividend still represents a cash outflow of C$70 million.

But hoping for average Q1 oil prices to stay constant over the year seems optimistic.

Besides, the company’s production will be decreasing and hedges will expire. Thus, funds flow will diminish at constant commodity prices, which will have a negative impact on the company’s debt ratios.

Whitecap Resources’ latest presentation highlights a strong debt profile. However, you should take into account the debt ratios listed in the slide below are based on trailing-12-month results, which benefited from much higher average oil prices than this year. 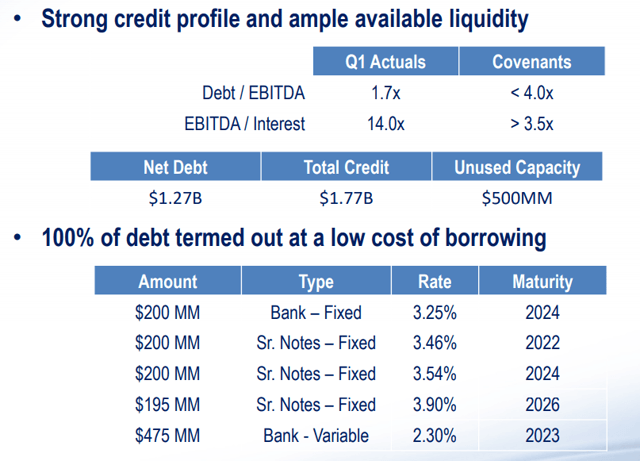 Given the currently volatile oil environment, debt ratios can worsen quickly. We have seen that at an average WTI price of US$46.17/bbl, the company’s net debt-to-annualized funds flow ratio increased to 2.4 at the end of Q1, up from 1.6 three months before despite a stable Q1 production volume quarter over quarter.

Also, refinancing long-term debt at the same rates as listed in the table above (less than 4%) seems unlikely, and Whitecap Resources will face an increase in its financing costs by 2022.

In addition, in the Q1 press release, management said it is considering acquisitions:

“We believe that mergers and acquisitions in the industry will occur and are necessary for a meaningful recovery in the sector. Whitecap is well positioned with our sustainable income and growth strategy to not only survive but to continue to look for opportunities internally and through industry consolidation to provide enhanced shareholder returns.”

Whitecap Resources could sustain its dividend this year at low oil prices thanks to its strong hedges and reduced capital program. But that strategy isn’t sustainable as production is decreasing and as long as the coronavirus situation and the oil price war persist.

Instead, the company should suspend its dividend and keep the corresponding C$70 million annual cash to reduce its refinancing risks. That would also provide management with extra dry powder for attractive acquisitions in a depressed market.

Note: If you enjoyed this article and wish to receive updates on my latest research, click “Follow” next to my name at the top of this article.