We maintain our overweight rating on SS&C Technologies (SSNC), a company developing various software solutions for financial institutions. In our first coverage on the stock last December, we highlighted the company’s strong balance sheet and moat, driven by its presence in a high-barrier and low-switching cost financial industry market. Furthermore, DPS (Dividend Per Share) has also been growing steadily, even during the recent crisis. Against the challenging macro backdrop, SS&C will expect a bit of a slowdown in new sales for the full year. Nonetheless, some catalysts, such as more tuck-in M&As, cost-saving initiatives, and a resilient revenue stream, should allow SS&C to maintain its consistent growth and profitability profile.

SS&C beat its guidance in Q1 and also announced three tuck-in acquisitions, Vidado, Capita, and Innovest. As stated in the company’s presentation, the guidance for the full year has not yet incorporated the revenues from these newly acquired companies.

Considering that Capita and Innovest generated $42 million and $20 million of revenues in 2019, the full-year revenue should see at least an additional +$62 million upside. Therefore, we think that the revenue outlook for the full year should look even better than the guidance. Despite the lower guidance outlook, profitability for the full year also looks solid across all the recovery scenarios. 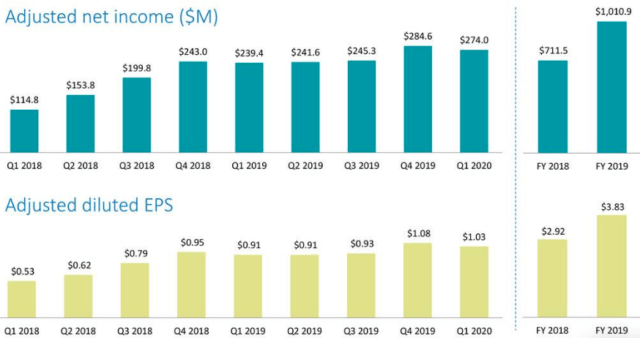 Even under the worst-case scenario, in which SS&C will realize a ~$1 billion net income, the company will still maintain its earnings, EPS, and net margin figures from last year. Furthermore, SS&C can also reportedly take another $50 million to $70 million out of its cost structure, which, in addition to the lowering of its credit facilities’ LIBOR rates from 2.25% to 1.75%, should provide another profitability upside. Nonetheless, we believe that Q3 and Q4 recoveries should look more likely and conservative enough. In June, for instance, SS&C has continued landing key deals such as Mid Atlantic Group, which has chosen SS&C to automate its FINRA reporting.

As such, we also believe that SS&C is well-positioned to maintain its resilience during a challenging time. As per the management comment in Q1, the majority of SS&C revenues come from the recurring business, which has been less impacted by the crisis. The ~96% revenue retention rate has also been in line with the historical average, while SS&C’s strong cash flow generation and balance sheet should allow it to reduce its leverage and acquire new companies going forward. In Q1 alone, OCF (Operating Cash Flow) increased by 7.5% to ~$148 million. As the company should expect ~$1.25 billion of OCF for the full year, we think that other acquisitions may be on the map considering SS&C may now have enough room to lever up after paying down its debts. In Q1, SS&C finally completed +$2.1 billion of debt payments related to its takeover of DST Systems in 2018, which ended up reducing its secured net leverage ratio to 2.67x EBITDA.

The lower rates environment is favorable to SS&C, given that it can lever up at a lower cost of capital to engage in potential M&As. However, we think that the situation will also be favorable to both its competitors or potential high-value targets, which should now have an easier time raising growth capital. With that in mind, we believe that key acquisitions will not be as straightforward as expected, despite the potential $5.8 billion dry powder.

SS&C share price has been under pressure in recent times, primarily due to the downward revision of the full-year revenue outlook to $4.5-4.6 billion from the previously $4.7 billion. The stock is currently trading at ~$55 per share, down ~20% from its YTD high, which we think presents a good entry point.

As we have discussed, SS&C remains a financial software giant with strong bottom line and cash flow profitability, both allowing the company to grow its dividend and acquire attractive M&A targets. SS&C has acquired companies like Intralinks and DST Systems, which provided a significant boost to revenue growth in the past. On the other hand, SS&C also maintains its $0.125 quarterly dividend payment even during the crisis. At ~3x P/S, the price is fair given the catalysts. We feel that the P/S can always retrace the ~4x-6x levels seen in recent times upon the DST System takeover, potentially once SS&C announces another key M&A deal down the line. 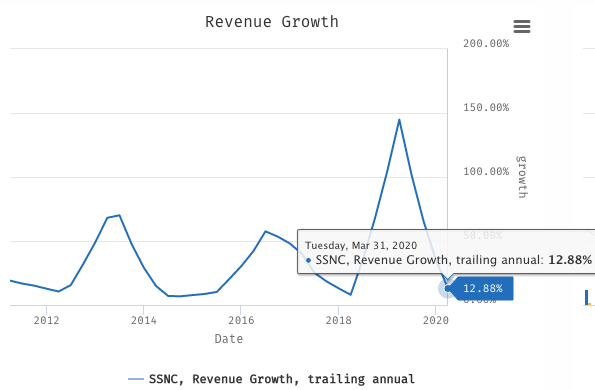 On a more speculative note, SS&C remains in a good position to do another M&A this year given the $5.8 billion dry powder, though management has indicated that it will only selectively aim for one with a strong EBITDA in addition to revenue to ensure moving the needle on both ends. Conservatively, assuming SS&C can acquire an M&A target that allows it to maintain TTM growth at ~13% (higher than the previous FY 2020 guidance, but lower than the inorganic growth upon Intralinks, DST Systems, and EZE integrations), SS&C will be looking at a potential target with ~$600 million of revenue, which is a smaller business than either DST System or Intralinks. Furthermore, assuming the unchanged ~27x P/E, SS&C should then trade at a forward PEG of ~2x, making it equally attractive from this standpoint.

Disclosure: I am/we are long SSNC. I wrote this article myself, and it expresses my own opinions. I am not receiving compensation for it (other than from Seeking Alpha). I have no business relationship with any company whose stock is mentioned in this article.