The main idea is actually quite simple. We are looking for companies that consistently outperform their peers in terms of revenue growth, and we also want these companies to make big profits on each dollar of investor capital.

No formula can guarantee success by any means, but it makes sense to expect solid fundamentals among companies with a strong combination of revenue growth and profitability levels.

To begin with, it is important to understand that a screener is not a list of recommendations. Far from that, a screener is only the first step in the idea generation process. The research process begins with the screener, it hardly ends there.

The only reason why I show the backtested performance data for the screener is that it can be illustrative to see what kind of performance this strategy would have produced in the past. But past performance does not guarantee future returns at all. This disclaimer has been repeated ad nauseam, which doesn’t make it any less true.

Leaving the numerical considerations aside, the concept is quite straightforward. The screener is looking for companies that consistently outperform the competition in terms of revenue growth and also make huge profits on invested capital.

The backtest picks the 30 stocks selected by the quantitative screener and it builds an equally weighted portfolio. The portfolio is rebalanced annually since it is based on long-term factors and it doesn’t require too much rotation. Trading expenses are 0.2% per transaction and the benchmark is SPDR S&P 500 (SPY).

Data from S&P Global via Portfolio123

The table below shows returns and risk-adjusted return metrics for the quantitative screener versus the benchmark over different periods. The backtested results are consistently good, but this is due to the market regime over the past two decades.

Big and profitable growth stocks have performed particularly well in recent years, and the screener is focused on those kinds of names. In a different market context, the results would have been very different.

For example, in a period in which cheap and beaten-down stocks are doing much better than high-quality growth stocks, the screener can be expected to significantly underperform the benchmark.

Data from S&P Global via Portfolio123

Selecting stocks based on quantitative variables has many advantages versus a more discretionary approach. Importantly, a quantitative screener can avoid many of the most expensive mistakes that investors typically make by relying too much on opinions, emotions, and speculation.

However, the method itself has some serious limitations too. By its own nature, the quantitative screener is based on past data, and investors need to do their homework in order to analyze if the companies on the screen can sustain their financial performance going forward. The numbers alone don’t tell the whole story, it is important to analyze the business behind those numbers in order to tell if the numbers are sustainable.

Focusing on a combination of growth and profitability can also leave aside many of the most explosive growth stocks in the market. Companies that have particularly abundant opportunities for growth tend to reinvest a large share of their income, so many times they are losing money on a GAAP basis.

Profitability can be a very good thing to have, but many times the companies with the best long-term growth potential are relatively young and unprofitable in the present time. By including profitability in the equation, the screener will certainly miss many of the most vigorous growth opportunities.

Valuation is the other side of the coin. A company with superior growth and attractive profitability certainly deserves an above-average valuation level. Nevertheless, even the best companies in the market can be mediocre investments when the price tag is excessively high.

In simple terms, the sustainability of financial performance and the valuation levels are arguably the two main factors that investors may want to seriously assess when analyzing the companies in this screener. 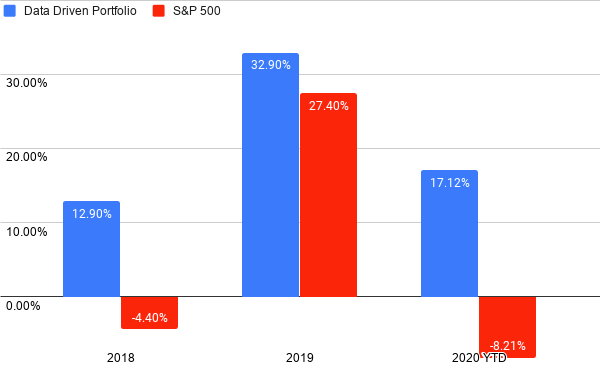 Disclosure: I am/we are long AAPL. I wrote this article myself, and it expresses my own opinions. I am not receiving compensation for it (other than from Seeking Alpha). I have no business relationship with any company whose stock is mentioned in this article.