Margin Pressure Can Slow Down Fastenal Company In Q2 (NASDAQ:FAST)


FAST To Plateau In The Short Term

Fastenal Company’s (FAST) strategic shift towards increasing onsite locations and reducing public branches is in tandem with the economic deceleration and industrial activity contraction in 2020. In a bid to strengthen its technology side, it has acquired assets from one of its key onsite vendors. Since Q1, the company’s sales volume has picked up due primarily to the surge in healthcare product sales, while fasteners sales continue to shrink.

So, as a result of lower construction activities, its product mix has changed, which may affect its margin adversely. Although it has implemented various cost-cutting measures, it is unclear how effective the steps will be given the shift in its customer base. I think the company’s sales base diversification will pay off, while its margin will diminish in the short term. Also, the stock is relatively overvalued at the current level. So, expect the stock price to lose some steam in Q2 and start improving in Q3.

What Is The Daily Sales Trend? 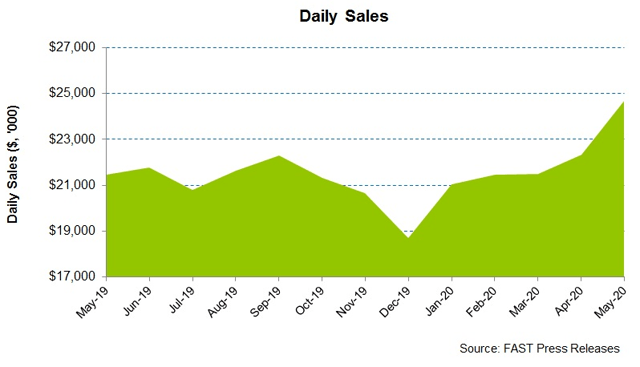 Quarter-over-quarter, the sale of non-fasteners products continued to decelerate. While the segment grew modestly in Q4 2019, the daily sales of fasteners declined by 2.6% in Q1 2020. Sales to non-residential construction customers declined by 7.8% in Q1. On the other hand, the category that saw tremendous growth was the daily sales of safety products (18.4% up). Sales to healthcare organizations more than doubled in March.

According to the latest report available, the company’s daily sales have increased remarkably over the past couple of months. In fact, in May, its daily sales were the highest in the past year, led by a 136% year-over-year increase in the sales of safety products. Fasteners sales declined by 15% during this period. Despite the sales volume recovery, the falling share of fasteners, which are typically higher-margin, is likely to impact the sales mix and the margin adversely in Q2. 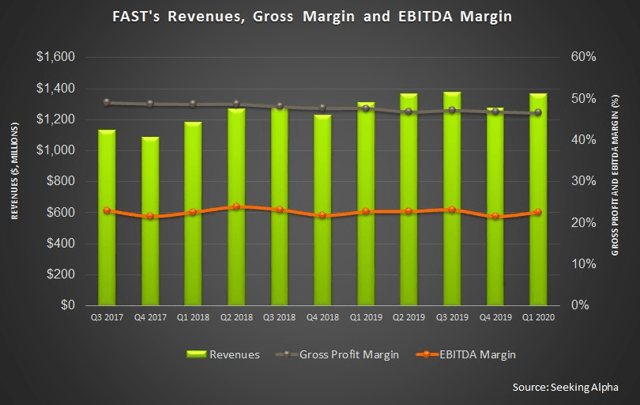 In Q1 2020, the company’s gross margin remained steady compared to the previous quarter. However, it did decline significantly compared to a year ago. Although variable costs remained stable, lower volume led to under-absorption of fixed costs, including truck fleet, manufacturing, and procurement operation. More importantly, the company’s product mix has deteriorated, i.e., lower-margin products are accounting for a larger share of the company’s product portfolio. Since the company operates a trucking fleet that requires a high fixed cost to maintain, it’s a drag on the company’s margin. The overall price level did not change much in Q1 compared to Q4 2019, and so, the price-cost factor was insignificant in Q1. While the mix change resulted in 65 basis points margin contraction in January, it widened to 90 basis points in March. The company’s management is uncertain as to how much it would impact the Q2 results. I think it would be safe to assume that the margin would remain low in Q2 as well.

Let us check out what the changed demand pattern under COVID-19 will mean for HDS. The safety product category was up by 31% in March following the company’s increase in global sourcing capabilities. Also, the company’s sales to healthcare organizations more than doubled in March, leading to a significant rise in the company’s revenues from government business.

The sharp fall in the company’s number of branches in March will result in natural workforce attrition, which will aid the company’s headcount reduction initiatives. Lower signings of Onsite branches will also reduce the company’s marketing-related costs. So, incentive compensation will decrease. Plus, the company will reduce employee-related costs by eliminating sales and travel-related selling. From Q4 2019 to Q1 2020, the company’s EBITDA margin inflated by 100 basis points to 22.6% after the company implemented some of these measures. However, if sales fall in Q2, as is expected by the management, it will result in under-absorption of fixed costs and can reduce the SG&A margin in the short term.

According to fred.stlouisfed.org, the U.S. real GDP decreased by 5% in Q1 2020. In comparison, the GDP grew by 2.1% in Q4 2019. The lower GDP growth is typically a bearish indicator for FAST. The ISM Manufacturing PMI improved marginally to 43.1 in May compared to 41.5 in April, although it continues to exhibit contraction in activities. Much of the decline was due to a decrease in the transportation equipment, petroleum & coal products, and fabricated metal products industries.

From data provided by the U.S. Bureau of Labour Statistics, the U.S. unemployment stayed sharply high in April and May after it remained historically low for several months in the previous months. High unemployment, typically, translates into lower demand for industrial products, and therefore, lower capex, which usually results in lower revenues and margin for industrial product providers like FAST. According to the U.S. Census Bureau, the new privately-owned housing units decreased by 20% in April 2020 compared to the 2019-average. The current fall indicates a slowdown in Fastenal’s end market. 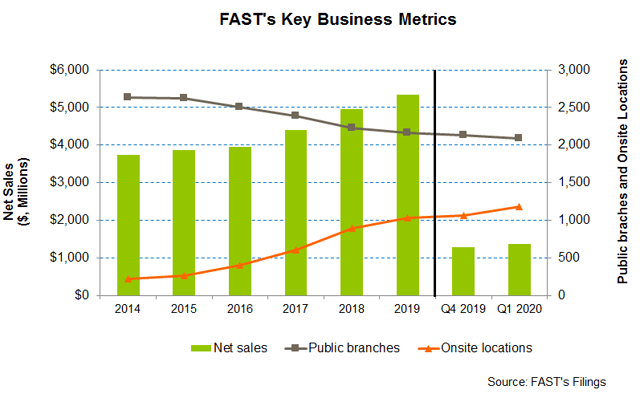 During Q1 2020, FAST closed 42 traditional branches compared to Q4 2019. The decrease in public branching also reflects the decline in U.S. GDP due to a fall in consumer spending, inventory investment, business investment, and exports. However, Q1 saw growth in housing investment and government spending. As the business conditions remain sluggish, investors should remain cautious regarding the outlook in Q2 and Q3, at least.

In contrast, the company continues to put faith in the success of the onsite platform, adding 115 locations (net of closures) during the quarter. While the fastener sales, which are typically cyclical, went up marginally in January and February, it went down by 10% in March due primarily to lower non-OEM, non-construction fastener sales. The dip exhibits the drop in activity in amusement parks, schools, and retail operations following the social distancing requirements as well as restriction of public access to its branches. Sales through the vending platform increased by double-digit in Q1. Approximately 20% of the company’s revenues are generated through sales through vending, while another 10% comes from the bin stock platform.

In March, FAST acquired assets from Apex Industrial Technologies. Investors may note that since 2010, the company has expanded its relationship with Apex, which provides access to the industrial MRO marketplace. The Apex transaction is expected to strengthen the vending platform technology. The management expects the current share of 30% of its revenues generating from this platform to double in the long term.

In January 2020, Fastenal increased its quarterly dividend by 14% to $0.25 per share, which translates to a forward dividend yield of 2.4%. Many of the company’s competitors, including DXP Enterprise (DXPE), HD Supply (HDS), and WESCO International (WCC), don’t pay a dividend. During Q1, it returned $196 million to shareholders through dividends and share buyback.

FAST also has a robust balance sheet, as I discussed in my previous article. As of March 31, its debt-to-equity ratio (0.17x) is lower than its competitors’ average (0.93x). Its competitors include HD Supply Holdings, WESCO International, and DXP Enterprise.

What Does The Relative Valuation Imply?

FAST’s forward EV-to-EBITDA multiple is nearly unchanged compared to the current multiple as opposed to the expansion in multiple for its peers, which implies that the sell-side analysts expect the company’s EBITDA to stay unchanged compared to a fall in EBITDA for peers in the next four quarters. This should typically result in a marginally higher EV/EBITDA multiple compared to peers. The stock’s EV/EBITDA multiple is significantly higher than its peers’ (HDS, FERGY, and WCC) average of 9.9x. So, the stock is relatively overvalued at the current level. I have used estimates provided by Seeking Alpha in this analysis.

According to data provided by Seeking Alpha, three sell-side analysts rated FAST a “buy” in June, while 11 of them rated it a “hold.” Three of the analysts rated a “sell” or “very bearish.” The consensus target price is $39.1, which at the current price, indicates ~6% downside.

What’s The Take On FAST?

FAST has started to reap the benefits from its current strategy of relying more on onsite locations while it reduces the reliance on the public branches. The company’s purchase of assets from one of its key onsite vendors indicate how its strategic decisions are affecting investment. The overarching story for the quarter has been a shift away from fastener sales to other healthcare product sales, particularly to the healthcare and the government sectors.

However, the shrinkage in the economic activities and construction activities have resulted in a product mix change, even though the pricing level did not change in Q1. Given the volume headwinds, I think the company’s margin will face pressure in the near term. To counter this, the company has implemented a slew of measures, including headcount reduction and decreasing marketing-related costs. It is unclear how effective the steps will be given the shift in its customer base. Since March, the PMI index suggests a severe slowdown, while the unemployment rate and spending on new construction have deteriorated. I think the company’s sustained effort to diversify the sales base will pay off, while its margin will contract in the short term.