There have certainly been winners and losers during the current pandemic, with stay-at-home plays such as Netflix (NFLX) and work-from-home plays such as Zoom Video Communications (ZM) being the most obvious winners. Consumer staples such as Hormel (HRL) have been somewhat of a mixed bag, as their increased at-home sales have been offset by decreased consumption in on-premises channels (i.e., restaurants, cafeterias).

One consumer staple stock that I see as largely benefiting from the pandemic is Keurig Dr Pepper (KDP), with its leading portfolio of at-home beverages that can serve as a replacement for venturing outside. In this article, I intend to analyze this stock from macro and fundamental perspectives and make a recommendation, so let’s dig in!

A Stay-At-Home Play Worth Considering

Keurig Dr Pepper is a leading producer of hot and cold beverages, most notably of which are the Green Mountain Coffee, Dr. Pepper, A&W Root Beer, Schweppes Ginger Ale, and Snapple brands. Due to its association with controlling shareholder JAB Holdings (which had originally purchased Keurig), the company is able to offer a number of well-known coffee brands such as Krispy Kreme, Peet’s Coffee, and Panera.

I see the company as largely benefiting from the current pandemic with its wide portfolio of both hot and cold drinks, as the pandemic has changed consumer behaviors at least in short to medium term. According to a CNBC report, Starbucks (SBUX) expects $3 billion in lost revenue in the fiscal third quarter due to the coronavirus pandemic. Starbucks’s outlook for 2020 paints a grim picture as stated below in the same report:

With many leading soft drinks and coffee brands, I expect that more consumers will be inclined to purchase the company’s products, such as Keurig machines for at-home coffee brewing. This, as a result, allows the company to take market share away from brick and mortar competitors like Starbucks. Consumers seem to agree as Keurig Dr Pepper outperformed its larger competitors Coca-Cola (KO) and Pepsi (PEP) with a 20.5% increase in sales for the four-week period ending June 13.

Digging into the financials, the company saw a 4.4% YoY revenue increase in the latest quarter, and I expect a strong Q2 based on the aforementioned double-digit increase in sales during the period from mid-May to early-June. Operating margin has also been trending up in the past four quarters leading up to Q1. I’m not too concerned about the Q1 drop, however, as management primarily attributed the decline in operating margin to a one-time $86 million non-cash impairment charge on an equity investment. 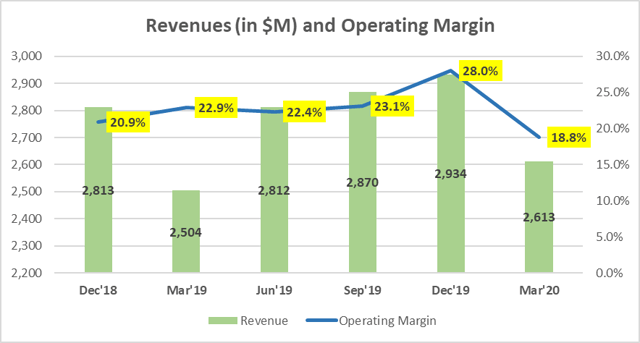 (Source: Created by author based on company financials)

Encouragingly, Adjusted EPS has been growing in the double-digits for the past two quarters (17% YoY in Q4, and 16% YoY in Q1). While some of it was due to a lower tax expense, the rest of the benefit came from reduced interest expenses due to continued deleveraging. As seen below, Total Debt to Capital has trended down from 33% in late 2018 to 31% presently. 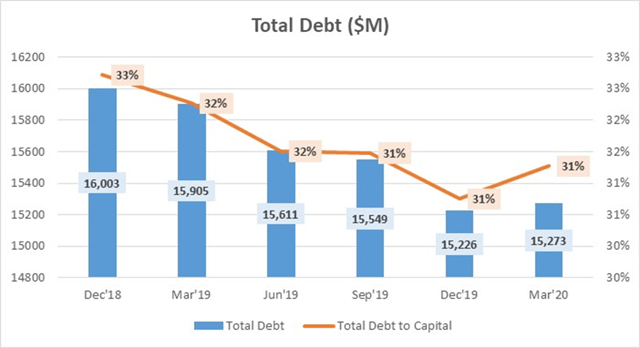 While I consider Keurirg Dr Pepper to be a low-risk company, investors should be mindful that the company is majority-owned by JAB Holdings and its majority-owned subsidiary, Maple Holdings. Collectively, they own 52.6% of the company’s shares. While this hasn’t been an issue to date, investors should make sure they are looking out for the best interest of all shareholders.

In addition, as with all manufacturing companies during the COVID pandemic, investors should be mindful of factory outbreaks that may curtail production.

Keurig Dr Pepper operates a well-regarded portfolio of consumer beverage brands. As most of the brands are geared towards at-home consumption, I see the company as largely benefiting from changes in consumer behaviors, which takes incremental market share away from brick and mortar competitors like Starbucks.

I have a Buy rating on shares at the current price of $28.30 with a PE ratio of 21.8. I have a one-year price target of $30 based on expectations of strong revenue growth and higher consumer adoption of Keurig devices for at-home consumption. 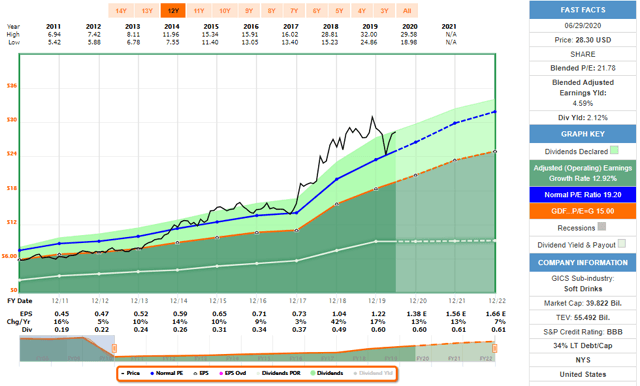