Like most car companies, Ford (NYSE:F) has been having a tough time during the coronavirus pandemic. The lockdown and subsequent stay-at-home orders have dampened consumer confidence and halted automobile sales. However, the company is an American icon with a fantastic product and a loyal following. Despite the current short-term difficulty, I believe the company still has a solid, long-term future.

The company is facing some serious short-term headwinds because of the capital and fixed-cost-intensive nature of the business. Ford reported Q1 2020 net loss of $2.0 billion. Even more concerning is this net loss corresponded with a first-quarter free cash flow of negative $2.2 billion. In order to raise cash, the company tapped around $15 billion from its credit lines, issued an additional $8 billion in debt, and suspended its dividend. The company ended Q1 with $35 billion in cash.

The preliminary results for Q2 do not look promising either as total vehicle sales were down 33.3%. This is really bad news for the company as, like all automobile manufacturers, Ford’s margins are incredibly tight. Despite having $155.9 billion in sales, the company only has a 13.6% gross margin. Given the high fixed costs, a small decrease in sales would lead to a large decrease in the bottom line.

A possible silver lining though is that retail sales were only down 14.3% and retail sales for trucks were practically flat. The bulk of the loss can be attributed to the lack of industrial fleet sales. This is not surprising given that companies were conserving cash due to the pandemic and a lot of these purchases may have been pushed back or canceled. Basically this means that the Q2 2020 results will most likely look much worse than Q1 2020.

Despite the present challenges, Ford is prepared to fire on all cylinders through 2020-2022. First and foremost, a new Ford Bronco is set to launch sometime in 2021 (with the unveiling in a few days’ time). The Bronco is a classic brand last seen in 1996. Ford is intending to tap on the nostalgia for the brand by highlighting its classic design such as its iconic horizontal grill. Similar to the Jeep Wrangler, an SUV Ford dedicated to taking on, the Bronco is an off-road-focused SUV. It will be mid-sized 4×4 and be a body-on-frame designed for rough roads. The Bronco will be offered in two- and four-door configurations along with a smaller variant called Bronco Sport. 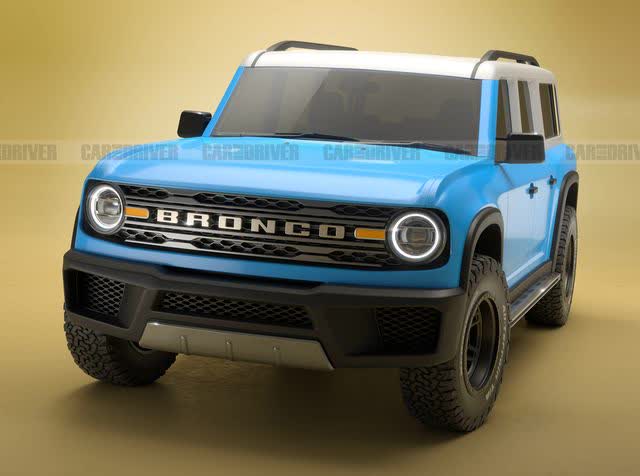 Ford has been very clever in building hype for the reveal of the Bronco by partnering with Disney to get the message across all of its platforms. In fact, the Ford Bronco is among the most anticipated cars in 2020 according to Google search trends. Hype for the Bronco has been building up since this study was done and is close to the highest it’s been in anticipation of the launch. The company seems to have learned its lesson from the failed launch of the Explorer, so I do not expect any issues from this launch. 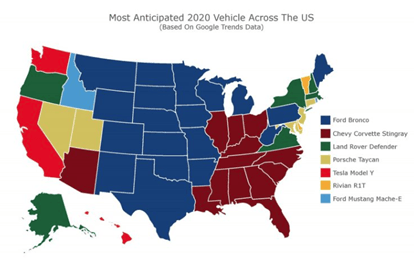 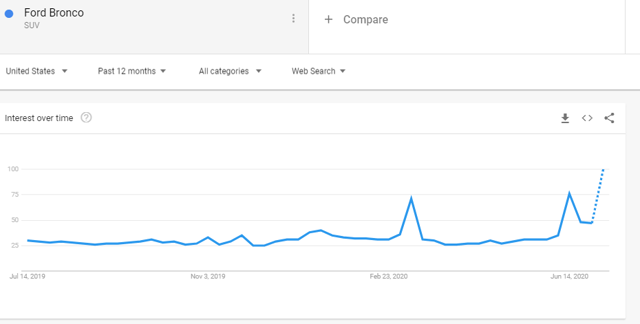 Brian Moody, executive editor at Autotrader.com, said, “Jeep has been capitalizing on their heritage for decades, and not in name only. Jeep has proven that a genuinely capable adventure/utility vehicle with a nod to the past is what many people want. And that’s what the Bronco promises, if they can deliver an authentic product and, more importantly, communicate that authenticity laced with nostalgia, it will be a winner.”

Apart from the upcoming Bronco, Ford has hedged its future in the electric vehicle market. Threatened by upstarts like Tesla (NASDAQ:TSLA) and its Cybertruck, Ford has dedicated itself to building its own electric vehicle using its ever-popular F-150 as the base. The F-150 is the best-selling vehicle in America, and it’s quite clever that Ford used this as a way to introduce its entire EV line-up. This means that for the average truck driver, the design and feel of the electric vehicle version F-150 is far more comfortable than the somewhat weird-looking Cybertruck. Ford is targeting to have this car out by 2022.

Pick-up trucks are the company’s differentiator and its bread and butter. Ford and Lincoln both ranked in the top 5 in J.D. Power 2019 US Initial Quality. Ford pick-up trucks have a brand history built over the years when it comes to power and reliability. Given Tesla’s Model Y production quality issues, I do not view the company as a threat to Ford’s long-term dominance of the market.

The other potential threat to Ford from the EV side is the upcoming Rivian truck which is set to launch sometime in late 2020. However, Ford has hedged being displaced by a possible disruptor by investing $500 million into the car manufacturing start-up. Ford’s Lincoln brand continues to closely work with Rivian using its electric vehicle platform. This partnership allows Ford to have a sort of “hedge” should Rivian become the dominant EV technology.

I feel that Ford is undervalued as the company’s price to book value is close to the lowest it’s been in five years. The current price to book ratio is 0.83x. Automobile manufacturing is a mature industry that is incredibly capital intensive. This deters new entrants from entering the industry and ensuring the incumbents’ dominance in the long term. While the stock has recovered from the lows quite a bit, it has not yet fully recovered from its price of $9.16 at the beginning of the year.

Among the big three car manufacturers, Ford also consistently has the highest gross margins. In a capital-intensive industry, having the highest gross profit margin gives you a substantial edge over your competition. However, there is room for improvement as Asian competitors like Toyota (NYSE:TM) and Honda (NYSE:HMC) have gross margins above 15%. Ford’s margin has been declining over the past five years. I feel confident that the company can improve its margins as it is undergoing an $11 billion restructuring plan in order to bring costs down and be more efficient. With the various possible tailwinds the company could have in the future, I believe the company is oversold and a reversion to a price to book value of 1 is probable. The company has a book value per share of $7.46 (which is my near-term target price as well). This implies a 25% upside from the current price levels.

Disclosure: I/we have no positions in any stocks mentioned, but may initiate a long position in F over the next 72 hours. I wrote this article myself, and it expresses my own opinions. I am not receiving compensation for it (other than from Seeking Alpha). I have no business relationship with any company whose stock is mentioned in this article.

Additional disclosure: Caveat emptor! (Buyer beware.) Please do your own proper due diligence on any stock directly or indirectly mentioned in this article. You probably should seek advice from a broker or financial adviser before making any investment decisions. I don’t know you or your specific circumstances, therefore, your tolerance and suitability to take risk may differ. This article should be considered general information, and not relied on as a formal investment recommendation.