On Monday, August 3, 2020, independent exploration & production company Continental Resources, Inc. (CLR) announced its second quarter 2020 earnings results. Admittedly, nobody expected these results to be good but these were especially disappointing and the market sent the stock plunging 3.3% in the after-hours session, although it has since rebounded somewhat. With that said, Continental Resources is one of the most well-managed independent oil and gas producers in the nation and it is likely that the worst is now behind it, barring another wave of mass economic shutdowns. The company certainly appears able to weather through the situation, as I discussed in a past article, which is something that any investor should appreciate.

As everyone reading this is no doubt well aware, the most significant event in the second quarter was the outbreak of the COVID-19 pandemic and the resulting global economic shutdown. This quarter saw nations around the world shutdown their economies and essentially quarantine their citizens in an effort to slow the spread of the disease. As this event curtailed travel along with much economic activity, it naturally reduced the demand for oil and gas. The law of supply and demand would imply that this would reduce the price of oil, at least until producers reduced the production of energy resources into line with the new demand level. This did in fact happen. As we can see here, the price of West Texas Intermediate crude oil fell from $61.18 per barrel at the start of the year to $42.32 per barrel today:

This understandably had a negative impact on Continental Resources’ latest results. In the quarter, the company reported a net sales price of $7.88 per barrel of oil equivalent compared to $36.03 in the prior year quarter. It should be fairly obvious why this would have a negative impact on the company’s financial performance. After all, if it received a lower price for each unit of oil and gas that it sold then it generated less revenues overall all else being equal. This means that there was less money available to cover the company’s costs and thus make its down to cash flows and profits.

All else is rarely equal with energy companies and with any other company. As noted in the highlights, Continental Resources saw its production decline significantly compared to the year-ago quarter. This is a direct result of the production cuts that the company implemented back in May and June in order to control its costs in the face of an oversupplied oil market and thus to preserve its balance sheet. It should be obvious why this would also have the effect of weakening the company’s income statement. This is because the company had fewer products to sell and generate revenues off of. In the second quarter of 2020, Continental Resources sold a total of 18.065 million barrels of oil equivalents compared to 30.091 million barrels of oil equivalents in the year-ago quarter. Thus both lower oil prices and lower production dragged down Continental Resources’ financial performance. 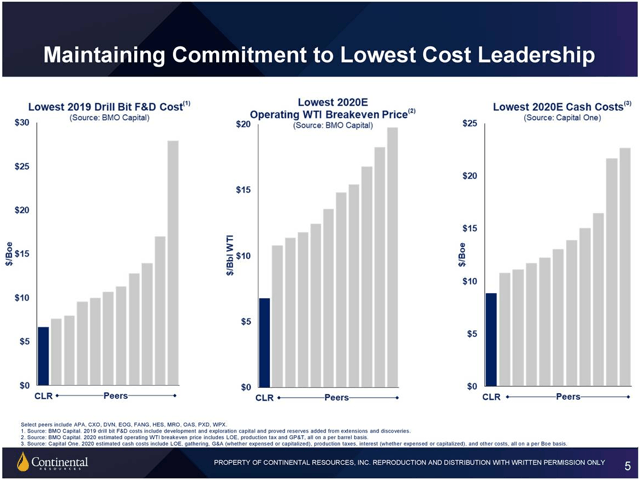 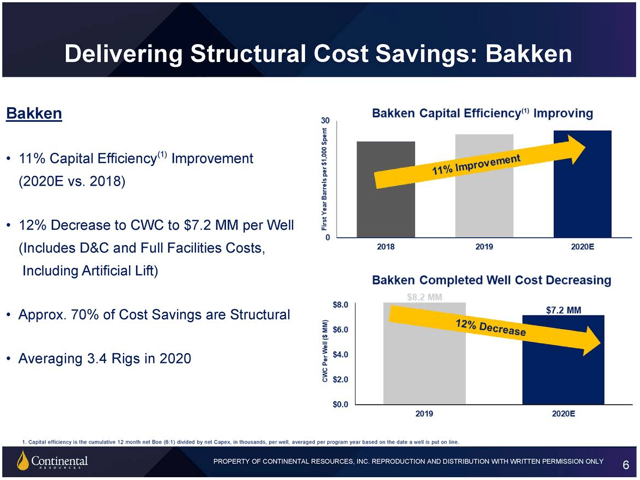 The company has not limited its efficiency improvements to the Bakken shale. It has also managed to reduce its costs in Oklahoma, although not to the same degree. In the second quarter, the company’s well costs were down by about 10% compared to the year-ago quarter. 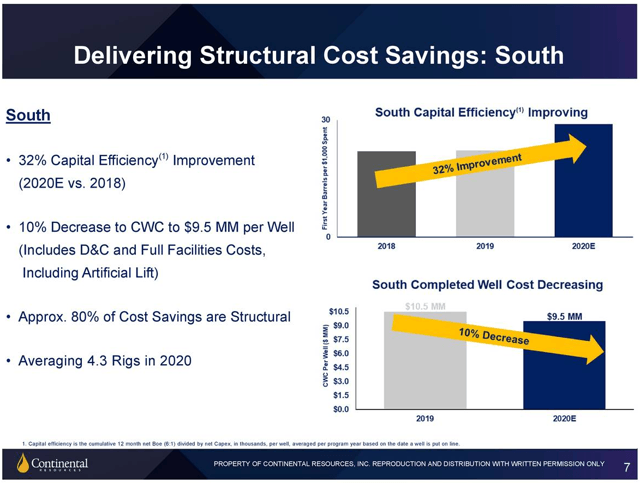 It is always a nice thing to see a company actively reducing its costs but it perhaps most important in the current market. This is because the lower a company’s costs, the more money is available to move from revenues to cash flows. This is something that is of vital importance when energy prices are suppressed. As I discussed in a previous article, North American shale plays are among the most expensive areas for an energy company to operate, which is largely due to relatively high decline rates. As a result of the high decline rate, an energy company will need to keep drilling new wells in order to maintain, let alone grow, its production. The cheaper it is to drill a new well, the more easy it is for the company to make a profit.

Fortunately, it appears that the worst is likely behind the company. As we can see in the chart above, oil prices have improved somewhat from their lows during the shutdown, although they are still quite a bit lower than the levels set at the start of the year. Thus, barring another shutdown or some other event that causes prices to plummet, it is likely that Continental Resources will realize higher prices for its production this quarter than it received in the second quarter. This should help boost the company’s revenue over the remainder of year. In addition to this, Continental Resources has announced that it is undoing some of the already-discussed production cuts. The company’s cuts in May and June were 70% of its previous level but in July it said that it will reverse some of these cuts but still will keep about 50% of the cuts in place. In June, Continental Resources produced an average of 150,000 to 160,000 BOE/day, which it increased to 225,000 to 250,000 BOE per day in July. The company announced that it will continue to reverse these productions cuts further on August 4. As the company continues to undo its production cuts, it will provide Continental Resources with more resources to sell, reversing them will undo some of the revenue decline that Continental Resources suffered due to these production declines in the second quarter. 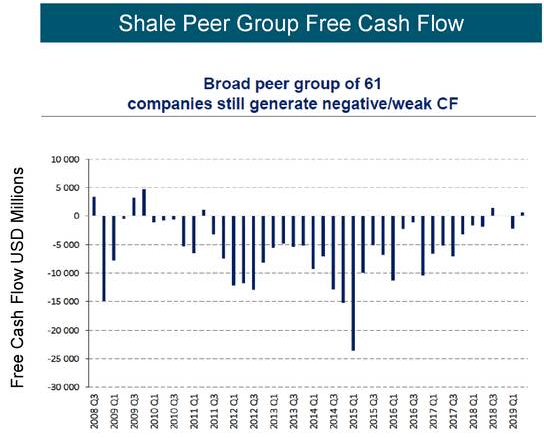 This scenario has resulted in these companies issuing copious amounts of debt in order to maintain their operations due to the lack of cash flow. I have predicted in the past that this could lead to bankruptcies across the sector to low energy prices. We have in fact already started to see this with companies like Chesapeake Energy (OTCPK:CHKAQ). Companies that have strong balance sheets and are well-financed are less likely to have this problem so it is certainly nice to see that Continental Resources fits into this category.

The company’s management released an updated guidance with its results, which certainly makes sense given today’s macroeconomic environment. This outlook suggests that the company will generate $200 million in 2020 and $500 million in free cash flow during the second half of the year. The company intends to use this money to reduce its net debt:

The company’s ability to do this naturally will be influenced by energy prices. The management’s outlook depends on West Texas Intermediate selling at an average price of $50 per barrel this year. If the price remains around its current levels, the company’s free cash flow will be considerably lower. Admittedly, I am not as sure that we will get the rebound in energy prices that Continental Resources expects. The novel coronavirus continues to spread widely among the population and is likely causing people to remain hesitant to travel or otherwise return to their normal activities. This will likely weigh on the demand for crude oil and by extension the price of it.

In conclusion, Continental Resources is reasonably well-positioned among its peers, although this quarter’s performance was certainly disappointing. Fortunately, now that energy prices have come up somewhat and Continental Resources has begun to restart its shuttered production, it appears that the company will see its performance improve over the second half of the year.

Editor’s Note: This article covers one or more microcap stocks. Please be aware of the risks associated with these stocks.