Byotrol: A COVID-19 Four Bagger I Think Is Too Risky (OTCMKTS:BYTRF)


The pandemic and lockdowns mean that many shares are down from where they started the year. Yet Byotrol (OTC:BYTRF) more than quadrupled from the start of 2020 to their high point. They have fallen back slightly but are still up more than three times for the year to date. They are a direct COVID-19 buy due to their healthcare product focus. However, in the long term the company has been a disappointment and I think it is too early to assess whether COVID-19 is a fillip to sustainable transformational growth, or just a one-off sales bump.

Byotrol is a British-based company which started off with a bactericidal ingredient which had similar antibacterial properties to bleach without the negative side effects, making it less dangerous if misused. The company tried various models of commercialization, as a branded ingredient for other manufacturers’ products and also with its own branded products. It has streamlined its portfolio, most recently following an August 2018 acquisition of U.K. based infection control company Medimark.

Essentially it supplies some proprietary bactericidal technologies, both as ingredients for other products and as part of its own standalone products. These are primarily targeted at human use although there is also a significant petcare-related segment.

It continues to compete in both consumer and professional markets. However, its consumer business has long struggled with the challenge of building brand awareness and preference without significant expenditure, especially when its main technologies are ingredients which are more often used to support claims, rather than being a whole brand story. As an example, it had trial of Byotrol24 in several hundred Target (TGT) stores in the United States, but concluded last year that the required resources, capabilities and marketing spend meant that further expansion would need a partner. In professional markets, these brand building challenges are less acute, as selling as an ingredient to a manufacturer who understands the product requires limited marketing.

Byotrol is listed on the small cap Alternative Investment Market.

COVID-19: A Direct Lift for Byotrol

The company’s antimicrobial products have found a clearer role and market with the onset of COVID-19. The company commissioned independent testing which confirmed a number of its products are effective against SARS-CoV 2, known to cause COVID-19. These included the hand foam sanitizer Invirtu.

Key developments around COVID-19 include:

Byotrol’s CEO recently gave an upbeat interview to Proactive Investors, highlights of which are here. He suggested that the company had found purpose, but that slightly worries me as after fifteen years as a listed company including many with him as CEO, I would expect it to have had a purpose before.

Current trading is strong, as seen from its 13 May announcement:

The Watchout: Bytrol’s Pre-COVID 19 History was a Long, Hard Slog

After the excitement of their novel technology early in the company’s history, their share price increased rapidly after its 2005 flotation on London’s junior market the Alternative Investment Market. It was in the 70p range by 2007. After that, it declined inexorably, reaching its nadir in 2019 after six or so years of anemic performance. So, even with the COVID-19 uptick this year, the stock stands at less than 10% of highs it tested over a decade ago.

That reflects the fact that the company has long struggled to monetize its technologies at scale.

Revenue has waxed and waned but always in the low single millions, in pounds. 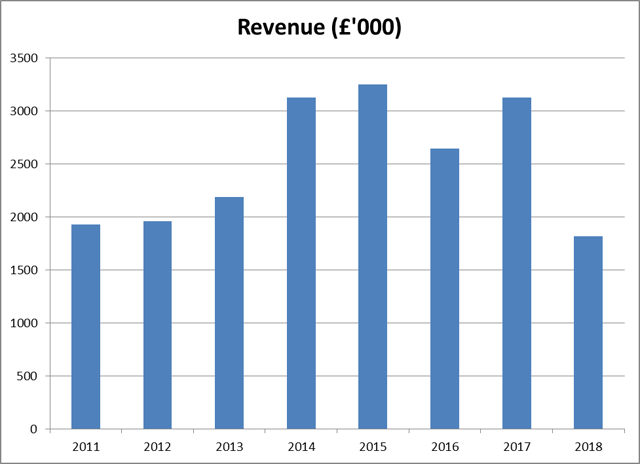 Revenue growth up to the Medimark acquisition was also sluggish. In the year ended 31 March 2018, Medimark’s revenues were £2.7m. Therefore, the acquisition roughly doubled Byotrol’s revenue at a stroke. Byotrol’s most recent interim results, for the six months to September 2019, showed sales of £2.17m. That means that monthly revenue of £1 million as suggested in the recent trading update is a significant increase of roughly three times the run rate, if it is sustained. But with a market cap of £27m, that is still a price/sales ratio more than 2. After fifteen years as a listed company, the revenue is not inspiring. First the Medimark acquisition then the COVID-19 impact have helped for now, but neither feels transformational.

Cash flow also doesn’t inspire confidence in the long-term growth story a quadrupling in share price suggests. The company’s operating cash flow in its past nine reported years has been all over the place, mostly negative. In itself, this might not be problematic, as it doesn’t reflect capital inputs such as investment. But it does point up the company’s struggle to convert initially promising technology into a profitable business even on a relatively limited scale. 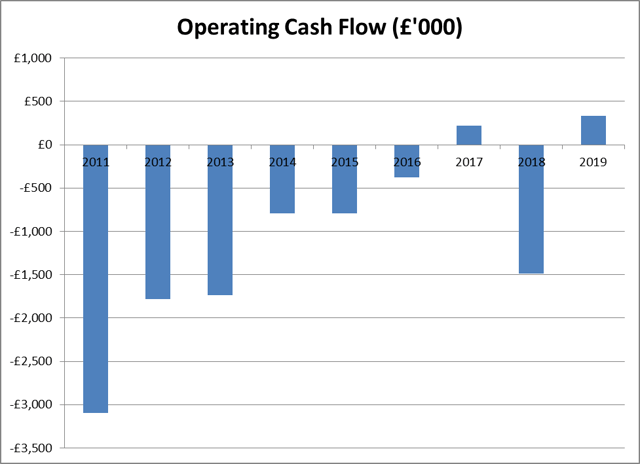 COVID-19 has thrown up a use case for a product like Invirtu. However, Byotrol has long had impressive technology and the use cases were clear. There were previous pandemics like MERS which highlighted similar issues, and key markets such as medical professional buyers would already have understood better than the general public the role of bactericides in healthcare and how Byotrol stacked up.

So, the use cases – although amplified – are not new. The historic lack of smooth, sustained company revenue and profit growth seems more likely due to internal factors some of which were hinted at in its most recent annual report: the financial burden of building consumer awareness, development costs, and challenges building markets at scale (note that the company is now producing at full capacity, demonstrating the last point again). These issues look largely unresolved.

Against this, there are two positive developments. One is the Medimark acquisition, which added a bit of scale including on distribution, seen in its impact on revenue. The second is a move towards partnerships like the one announced for the Americas this month, which can provide licensing and royalty payments without significant incremental financial or organization outlay by Byotrol.

These could provide pointers to COVID-19 as a transformational event which leads to a bigger, more profitable Byotrol. But its track record means – whatever the current demand for Invirtu may be – this is a highly speculative investment.

Another Symptom of Unpredictability: Accounting and Audit

Another concern I have with Byotrol the company, as opposed to Byotrol the product, is its recent accounting history raises a red flag.

Last October, trading in Byotrol’s shares was suspended for about a week and a half as it failed to submit accounts on time as required by listing rules. Its relisting coincided with the delayed publication of its annual report, in which the auditors qualified their opinion. In March, the company announced a change in auditors.

The auditors’ qualified opinion related to a small sum of money (full details in the most recent company annual report, starting at page 30) but nonetheless that, the subsequent change in auditors and the trading suspension don’t inspire confidence that the company is being run as professionally as I would want.

Byotrol has some good technologies, and they have come to prominence with COVID-19 in ways which have translated directly into large revenue growth in a short time. But the company doesn’t have a good track record of commercializing its technologies. It needs to find ways to reach profitable sales volume of its technologies without incurring the cost of building the market itself, something which it is addressing but has limited success models for to date. Its share price is a fraction of what it was over a decade ago, so while it may bounce around including upwards, the risk:reward ratio is out of this investor’s comfort zone.

Editor’s Note: This article covers one or more microcap stocks. Please be aware of the risks associated with these stocks.